Reeves was born on 13 Sept, 1896, and baptised in Normanton the following year. The family was then living at 7, Batty's Buildings, Streethouse. By the time he was 4yr, his father William and mother Mary Jane had 9 children - 7 boys and 2 girls, and their address had changed to Snydale. Already by age 14yr, Norman was working down the pit at Purston Jaglin, Featherstone, as a pony driver. He now had an address of Street Lane. By 1915, aged 18 years, he had progressed to being a miner. On 11th Dec he enlisted at Featherstone as a gunner in the Royal Garrison Artillery. At first Private 214342 was in the Army Reserve and carried on working in the pit as coal mining was a vital job. Coal was needed on the Home Front for heating and making town gas, as well as powering the factories. It was needed to fuel the trains both at home and on foreign soil taking troops and ammunition to the front line, and bringing back casualties.

Eventually Norman was mobilised on 2 May, 1918, to South Camp, Ripon. He weighed 148 lbs (62kilo), had brown hair, grey eyes and a fresh complexion. He stated on his papers that he had twisted his knee 18 months previously and that he had 3 vaccination marks on his left arm. He was 5ft 5Â¼in (165cm) and had a chest expansion to 37Â½in (94cm). By 15 May, 1918, he was with the Western Command. On 2 Aug, he managed to squeeze in a wedding to Frances Stott and set up house in 77, Winning Lane, Streethouse. By 1 Sept, he was appointed General Signaller, 2nd Class. He had undertaken 4 months training at the RGA Signalling Training Depot. He was only 21yr. By 9 Sept, he was Confined to Barracks for 3 days and forfeited 1 day's pay for being Absent Without Leave for 18hr and 30 mins. As a soldier, Norman's time was short-lived as he was despatched on 3 Oct 1918 to become a miner Grade 1. He had 'good character', and his employer was New Sharleston Colliery Co, Wakefield. He was formally discharged from Dover 14 Dec 1918 as surplus to requirements, Grade 1. He had no disability and was a member of the Refuge Approved Society for his health needs. In 1920 he married another Frances, Frances Robinson. He died in March, 1976. 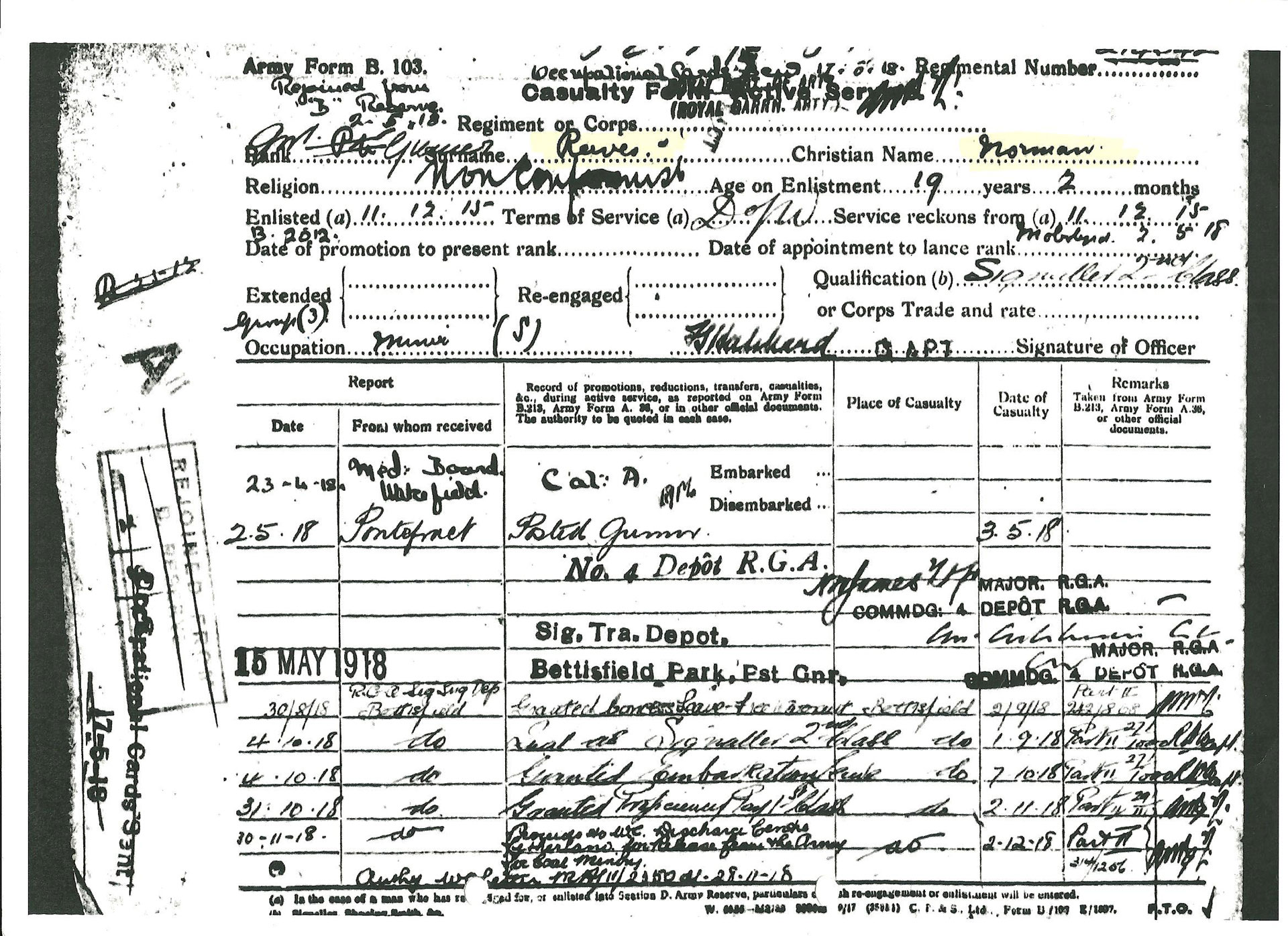